the show is now officially up at Cerner Corporation .. if you want to take a virtual tour of the goods, just click here .. it's located in the Vision Center and has a sexy spire protruding from the facility for all the little chickadees around to take notice .. the show will be up through April and there will be some sort of open house in the near future .. all my thanks to the fellas who helped hang this show .. enjoy ..

Posted by Joe Dimino Art and Broadcasting at 1:54 PM No comments:

travel video blog is UP

the new photo.paint travel project is up and running .. a new section on youtube.com has been created to following this project .. to access it, click here .. enjoy the ride ..

Posted by Joe Dimino Art and Broadcasting at 8:48 PM No comments:

during my first official art show, i had a contest that would guarantee a piece of artwork to the person that would provide the most clever name to one of my paintings .. all the pieces in my first show were untitled and all observers were given latitude to name pieces .. the best story was something somewhat unrelated, but stands as one of the best stories to date .. one random night while the show as going on, i stopped into a midtown bar for a drink and started talking to a gal in her early 40's that was from indiana .. as i went on talking about the town, she mentioned the river market area and the fact that she saw an art show and stole all the post cards from the show .. she said that she felt so guilty that she went to confessional .. and at that point, she menitoned my name and i showed her my driver's license for validity .. i thought she was gonna fall off her bar stool .. she loved my marquee piece and called it 'lady in indigo' .. becuase of her zest and zeal, i later met her at a bar and gave her the marquee piece for being so honest and cool about herself and her existence .. her name was melissa guth and she was deserving of winning that contest .. cheers ..

Posted by Joe Dimino Art and Broadcasting at 9:25 PM No comments:

blow up some art

it's been some time since i thought about this, but i had a very enticing offer on the table for a potential buyer of my art at one time .. during my first public showing ever at the former cup and saucer in the river market area, i told a partially drunk fella that i would make a performance art out of a piece of art .. he liked the piece and contemplated a purchase of a painting that had a long line of fireworks drapsed in thick paint .. i told him if he wanted the piece that i would take a high res photo of the painting, then blow up the firework string, and frame the pristine photo with the mutilated artwork and house them under one nice frame .. i never heard back from this fella .. sometimes, you know ... cheers and the offer is and piece is still on the table ..

Posted by Joe Dimino Art and Broadcasting at 9:19 PM 1 comment:

what to do with old paint globs? i recently concocted my first live paint ball .. it's the result of all the acrylic paint i flick off my 6 plastic palletes that harden over time .. it's actually quite nice .. i want to create several more .. enjoy ..
Posted by Joe Dimino Art and Broadcasting at 1:29 PM No comments: 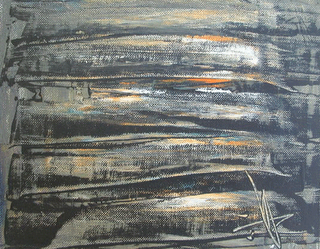 miles and i blanketed grandview and downtown kc over the weekend .. very soon a video diary of all related stories in relation to the traveling artwork project will be posted on the site .. cheers
Posted by Joe Dimino Art and Broadcasting at 12:45 PM No comments: